Monetary seigniorage has greatly privileged the United States, yet drastically altered numerous global countries and economies through its long-lasting effects. The dollarization of foreign currencies has innately led to a cheaper rate currency exchange and trade for America, a benefit known as seigniorage. The goal of my research is to explain the impacts of seigniorage on the US economy, global political scene and dollarized countries.

To aid in our discussion of seigniorage it is necessary to understand some basic concepts regarding dollarization, the gold standard and monetary policy. Governments implement economic policy through central banks. In the United States, the Federal Reserve enacts monetary policy through the Federal Open Market Committee (FOMC). The FOMC is comprised of seven regional board members and the presidents of 12 regional banks, where only five presidents can vote at one time. The Great Depression and two world wars devastated many economies throughout America and Europe. Allied members decided that policy measures needed to be put in place to protect societies.

After World War II, the leaders of many countries came together to form the Bretton Woods Agreement, an attempt to stabilize exchange rates and economic growth through trade. This agreement placed the United States dollar on the gold standard, meaning that until the early seventies you could have exchanged your paper currency at a bank for an equivalent value in gold. This meant that the monetary base, the total dollars in economy, cannot possibly exceed the United States gold stock.

Dollarization is the adoption of US dollars in foreign countries, essentially utilizing American currency as their main tools of exchange. When one country trades with another who uses the first country’s dollar as their main currency, the cost of exchange becomes cheaper for the country with the dominant currency. The benefits reaped (money saved) from such privileges are one of the aspects of seigniorage, which some argue should be split between the United States and dollarized countries. But, do these dollarized foreign countries receive any other benefits from using our currency?

Many factors influence a country’s economic prosperity and growth, but monetary policy has a major impact. If a government does not have the resources available to effectively implement their own unique currency and monetary policies, they must rely on the aid from more developed economies. Economist Stanley Fisher also states that, “Two factors argue in favor of use of a foreign money. First, additional costs of exchanging currencies are incurred when a domestic money is used and not incurred when a foreign money is used… The second argument for using a foreign, rather than domestic, money is discipline” (Fischer). When the governments of other countries do not embody the fiscal control necessary to guide economies, they resort to dollarizing their currency.

The United States has been a major benefactor of Seigniorage on the national level for decades. Because the Federal Reserve controls the money supply, they are also the direct benefactors of their monetary policies. If the Federal Reserve wants to increase the money supply, they respond by purchasing treasury notes, which adds liquidity to the markets.

In 2008, the Federal Reserve purchased treasuries through Quantitative Easing measures, but instead of the money ending up as cash held by the public, it has rather been held by the institutions that created it. As part of this operation to buy and sell treasuries between the Fed and Treasury, the balance is being moved between accounts, yet no actual money is created.

James Hamilton, from the Economic Browser, explains that with the motive of adding liquidity to the markets while keeping inflation low, the Fed achieved this, “by selling off a large chunk of its holdings of Treasury securities, and replacing them with loans and alternative assets” (Hamilton). In continuing the discussion of national seigniorage benefits, it is important to analyze the Fed’s balance sheet prior and post operations in September of 2008. 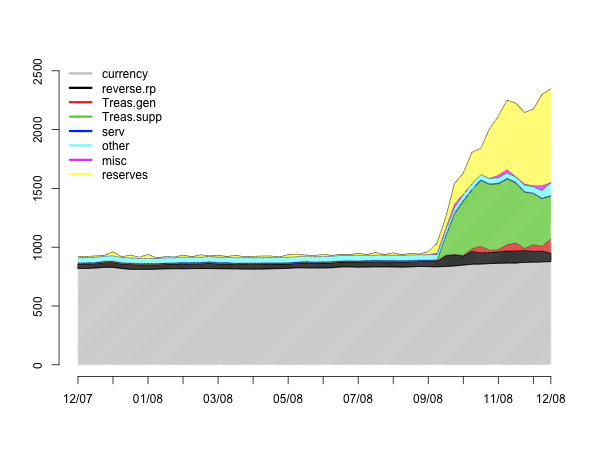 As shown from the graphs above, the Federal Reserve’s assets and liabilities are almost identical throughout the initial quantitative easing operations. By keeping the money “created” out of public circulation, the Federal Reserve managed to fend off inflationary pressures for now. At the point where the creation of money growth exceeds the actual economic growth of the economy, and these dollars are released into the economy, we are certain to see increased inflation.
This has been a major concern lately due to the run up in the stock markets while interest rates have remained historically low, leading many to wonder when the alligator jaws of market reciprocity will snap shut. The significance of the Federal Reserve balance sheet comparison lies within the revenue generated (seigniorage) from the explicit trades, resulting in large interest gains.

David Kestenbaum, a National Public Radio (NPR) reporter and host of Planet Money, explains that, “more dollars in circulation means more treasury bills at the Fed. And unlike dollars, the treasury bills earn interest… Basically, when you hold onto U.S. cash, you’re giving the Federal Reserve an interest-free loan” (Kestenbaum). This ability to borrow at reduced rates of interest allows the United States government a major competitive advantage when funding growth.

The United States also directly benefits of seigniorage derived from the global trade that numerous firms transact each day. Because the US dollar continues to be one of the dominant international currencies, this advantage allows Americans to import goods at a relatively cheaper price, while earning higher revenues on exports. Corporations, like Nike or Apple, produce their products at a cheaper rate internationally, allowing them to import and then retail into various markets creating a substantial gain.

Seigniorage also allows national firms to earn higher revenues on exporting trade because of the lowered transaction costs associated. This inherent privilege bolsters much economic growth for both the United States and it’s trading partners that utilize the U.S. dollar.

Technological advancements in the global financial industry have greatly influenced the amount of seigniorage revenue generated by the United States. The increases in efficiency create a currency that is dominantly utilized through digital means, rather then paper bills. In a 1996 US Treasury Conference on Electronic Money & Banking, Alan Greenspan states:

Today, there continue to be incentives for private businesses to recapture seigniorage from the federal government. Seigniorage profits are likely to be part of the business calculation for issuers of prepaid payment instruments, such as prepaid cards, as well as for traditional instruments like travelers checks. As a result, in the short term, it may be difficult for us to determine whether profitable and popular new products are actually efficient alternatives to official paper currency or simply a diversion of seigniorage from the government to the private sector. Yet we must also recognize that a diversion of seigniorage may be an inevitable byproduct of creating a more efficient retail payment system in the long run.

The concept of a more efficient retail payment system improves the bottom line of many companies, generating seigniorage revenue that benefits both national companies and governments.

The impacts of the United States seigniorage internationally range from the explicit economic deprivation to an implicit loss of national identity. As discussed prior, the losses of wealth due to higher transaction costs negatively affect many international trading partners. This makes sense because foreign countries would need to convert currencies to trade with the majority of global competitors, increasing the cost of the transaction and the risk associated with the currencies involved. These risks need to be actively hedged to maintain the optimal transaction environment, also increasing the costs associated.

National pride and identity are implicit components of economic success for many internationalized countries. Without the sovereignty gained, through a government’s central bank, many citizens lose faith in their leaders competency. Economic blocs motivate the increase of national identity through a unique currency, usually picturing a national leader or location of importance. In the United States we take much of this patriotism for granted because our government institutions where born out of these historic roots, rising to become a dominant economic leader, shaping the culture we have today. Foreigners who live in countries that have dollarized, see presidents and scenes not influential of their cultures, greatly diminishing the countries attainable economic productivity.

The use of a foreign money “carries the seeds of its own destruction, since the value of the outstanding stock of currency is a seigniorage incentive to the government in which introduces a domestic currency” (Fischer). Governments who abandon national currencies for foreign are challenged with this loss of revenue and the influence over local economies. Stanley Fischer believes that it is not optimal for governments to adopt foreign currencies unless absolutely necessary, at which point, he asks the pressing question of ”Who is to guard the guardians?”

Former Federal Reserve Chairmen Alan Greenspan explains that, “Our optimum financial system is one of free and broad competition that is presumed to calibrate appropriately the changing value of products to consumers so that the risk adjusted rate of return on equity measures the success in providing what people want to buy” (Greenspan). A international environment such as this is unattainable in today’s world because of efficiencies lost to paper currency, resulting in government revenue in the form of seigniorage.

Current estimates of US seigniorage revenue continue to decrease as competition and imbalances in trade adjust. Charles Dumas explains that, “the US, now it has ‘woken up’, has policy tools at its disposal for reducing global imbalances, and enforcing the post-Bretton-Woods system; free trade, and capital movements with floating exchange rates to permit national autonomy in monetary policy. The regressive yearning for fixed rates is likely to prove damaging to its perpetrators, not beneficial as they hope” (Dumas). Only by increasing taxes, selling treasury instruments (via increasing the debt ceiling), and printing money (seigniorage) is the Federal Reserve able to generate revenue. Recent financial uncertainty throughout the global economy has challenged various monetary policies, most influentially through the Euro zone crisis.

The European Central Bank (ECB) has been challenged with the dilemma of monetizing the debt of floundering countries at the cost of productive countries. The ECB purchases the debt of struggling member governments, which transfers the liability to the central banks balance sheet, making it impossible for these countries to individually monetize their debts.

The Euro crisis is a prime example of the loss of seigniorage control that governments face when combing central bank authorities, or utilizing another’s currency. FTSE Global Markets author Patrick Artus recently explained that, “private sector involvement (PSI) is one of the tools aimed at bringing the euro zone sovereign debt crisis to an end. It is intended to organize Greece’s default on its sovereign debt. Yet unlike the ECB’s bond purchase scheme, it is capable of reducing a country’s outstanding debt, hence improving its solvency” (Artus). Through combined government efforts and private sector involvement, it is likely that member countries can recover without the dissolution of the Euro.

American seigniorage has greatly altered numerous countries and global economies through the revenues generated and lost. This revenue helps to fuel the current US economic recovery and acts as a tool of income for the Federal Reserve. The monetary policy enacted by our central bank creates a privilege that only few countries receive, an opportunity to generate growth through money creation. This is why America would not be the same today without seigniorage.